By Ian McMillan and Paul Blizzard

The United States Patent and Trademarks Office (USPTO) has released an updated set of Eligibility Examination Guidelines to provide guidance to examiners on when to reject claimed inventions as ineligible abstract ideas. These guidelines give a sense of what computer-implemented subject matter the USPTO considers to be ineligible for patent protection. 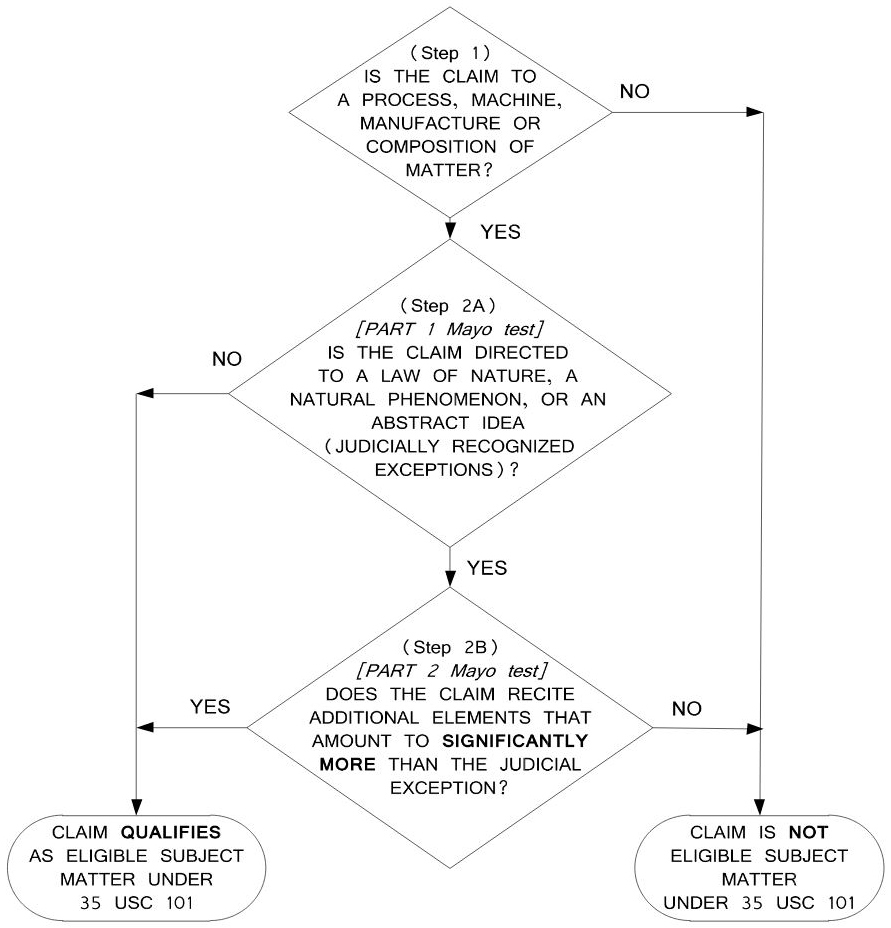 The posting of the Guidance in 2014 provoked much comment and criticism, some critics alleging that under the Guidance virtually nothing was eligible for patent protection. The July 2015 Update on Subject Matter Eligibility4, (“the Update”) responds to these comments and criticism.

The Update provides an updated set of subject matter examples, and also divides the case law into different categories of abstract ideas, which are useful both as a credible attempt to organize the case law, and to provide insight into the USPTO’s perspective on this case law and arguments they may find persuasive.  It also provides reassurance that the USPTO is addressing criticism that under the current rules post-Alice5 there is not a clear path forward for software patent applications because of the difficulties encountered with subject matter objections. The Update makes it clear that examiners should not determine a claimed concept to be an abstract idea unless the claimed concept is similar to at least one concept that either the Federal Circuit or the Supreme Court have identified as an abstract idea. In other words, applicants should be able to avoid having their claims rejected, at least in the USPTO, on subject matter eligibility grounds by defining concepts in the claims that differ sufficiently from claim concepts invalidated on these grounds by the Federal Circuit or the Supreme Court.

Of course, much will depend on how aggressive and creative examiners are in determining that claimed concepts they are considering are similar to a concept determined to be an abstract idea by the courts. Further, the Update makes it clear that this determination of similarity does not require evidence: examiners can ground such a rejection by merely explaining, clearly and specifically, why the claimed concepts are similar to concepts determined to be abstract ideas by the courts, and are thus ineligible for patent protection.

In the Update, several new examples are provided in addition to those found in the original Guidance document and include:

In each example, the Update evaluates the hypothetical claims based on steps 2A and 2B, and discusses how an Examiner might determine patent eligibility for patent claims covering an analogous technology.

An interesting example in the Update is #25, since it introduces hypothetical claims modeled after the technology in the 1981 case Diamond v. Diehr, 450 U.S. 175 (1981).  This case dealt with a patent involving a computerized process controlling a rubber molding press. The invention offered significant advantages over the prior art at the time, as it enabled in situ temperature monitoring and automatic recalculation of the optimal cure time. This calculation involved using the temperature inputs and the Arrhenius equation, long used to calculate the cure time of rubber molding processes.

“A mathematical formula, as such, is not accorded the protection of our patent laws, Gottschalk v. Benson, 409 U. S. 63 (1972), and this principle cannot be circumvented by attempting to limit the use of the formula to a particular technological environment. Parker v. Flook, 437 U. S. 584 (1978). Similarly, insignificant post-solution activity will not transform an unpatentable principle into a patentable process.  To hold otherwise would allow a competent draftsman to evade the recognized limitations on the type of subject matter eligible for patent protection. On the other hand, when a claim containing a mathematical formula implements or applies that formula in a structure or process which, when considered as a whole, is performing a function which the patent laws were designed to protect (e.g., transforming or reducing an article to a different state or thing), then the claim satisfies the requirements of § 101. Because we do not view respondents' claims as an attempt to patent a mathematical formula, but rather to be drawn to an industrial process for the molding of rubber products, we affirm the judgment of the Court of Customs and Patent Appeals.”10

In example #25, according to the Update, Claim 1 from Diamond v. Diehr involves a repeated calculation of the Arrhenius equation, a mathematical relationship held to be representative of a law of nature, and therefore Step 2A is met. Next, analyzing the claim as a whole using the Guidelines, the combination of steps taken together amount to significantly more than just the abstract idea of the Arrhenius equation (Step 2B).  Thus, claim 1 in Diamond v Diehr is patent eligible, satisfying the “significantly more” step of the test.

The USPTO may have seen fit to rewrite the justification for this case to bring it into accord with the Alice framework. The Court in Diamond v Diehr determined that the structure claimed, considered as a whole, was the kind of structure and performed the kind of function the patent laws were designed to protect. In making this determination, the Court refers to the machine or transformation test to establish the patentability of the claimed invention. However, after the decision of the Supreme Court in Bilski, the machine or transformation test is no longer the definitive test, although it remains a helpful indicator of subject matter eligibility.

Categories of abstract ideas outside the scope of patentable subject matter

The US courts have provided little explanation of when and why patent claims are invalid for covering abstract ideas. Since the USPTO lacks the authority to create its own definitions, and it is difficult, perhaps impossible, to discern principles from the case law, the USPTO has instead focused its efforts on helping examiners to determine if the concepts defined in claims are similar to what the courts have determined to be abstract ideas, and are thus invalid. The Guidelines and Update construct several different categories of ineligible abstract ideas based on the case law.  Each category covers many different examples, taken from the case law, of concepts defined in patent claims that have been invalidated by either the Federal Circuit or the Supreme Court as abstract ideas. Clearly, patent applicants should do whatever they can to define their inventions using claim language and concepts that fall outside these categories.

These categories are the closest the USPTO gets to general concepts or principles for subject matter eligibility. These categories include the set of “judicial descriptors” associated with software based subject matter that has been identified by precedent in the Federal Circuit and the Supreme Court as patent ineligible, including

It is difficult to find recent cases where software related patents have survived subject matter eligibility analysis by the Federal Circuit or the Supreme Court. Given the numerous examples of ineligible subject matter in the Update and Guidelines combined with the rejection statistics19 from the USPTO and invalidation statistics20 at the Federal Circuit, it is reasonable to ask whether any claims have recently survived challenge on subject matter eligibility grounds.  One example outside of the scope of software subject matter is Myriad21, where the Supreme Court allowed claims for complementary DNA.

While the Supreme Court invalidated all of the claims in both Bilski and Alice; there is one case related to software subject matter that has survived scrutiny, at least at the level of the Federal Circuit:  DDR Holdings v Hotels.com22.

The Guidelines discuss this case. This is the first Court of Appeal for the Federal Circuit case to uphold the validity of a software subject matter patent since Alice.  In this patent, the claims were directed to managing the look and feel of an e-commerce website to provide “store within a store” functionality.

The claims in DDR covered a software solution to a problem, which, according to the judgment but not the dissent, was unique to the internet. The claims dealt with the problem of retaining website visitors at an ecommerce site and offered a solution anchored in software that addressed a challenge unique to the web.  Specifically, in the prior art a user clicking on an advertisement would be taken away from the host website to the advertising merchant. The claimed invention involves presenting a hybrid page generated by the host website to include a composite of the host website and advertising merchant’s product information. The decision was based, at least in part, on the grounds that the claimed concept lacked a non-technological analog.

When drafting new applications for software-based inventions, it is important to keep in mind the judicial descriptors of ineligible subject matter, and to draft the claims to avoid categorization under any of these judicial descriptors if at all possible. However, it is also important to keep in mind that this area of law is in flux, and will almost certainly see significant change over the next few years. In particular, the categories of ineligible subject matter constructed by the USPTO may evolve or grow in number over the next few years as more cases are decided. Eventually, as the courts grapple with more and more cases, clear principles may start to emerge from the present chaos. One day, it may again be possible to rely on general principles to distinguish patent eligible subject matter from ineligible subject matter. At present, that day seems far distant, and for the foreseeable future it will be even more important to keep up-to-date on the latest Federal Circuit and Supreme Court precedent, mostly to know what kinds of subject matter to avoid claiming, but also to keep an eye out for the occasional beacons of hope, such as a DDR.