By Cameron Gale and Paul Blizzard

The ongoing development of quantum computers, including the physical devices themselves and associated quantum software are driving an explosion of patent filings around the world. Canadian businesses and researchers have long played a leading role in the development of quantum computing technologies. However, Canada lags behind other countries in patent filings related to quantum computing and risks losing out on the significant research and commercialization potential for this rapidly growing industry.

What is Quantum Computing?

Quantum computing is a sub-field of quantum physics that uses the properties of the quantum states of matter, including superposition, interference, and entanglement, to perform calculations. Computational problems that can be solved by a classical computer can also be solved by a quantum computer, and vice-versa.

Significant Investments are Being Made into Quantum Computing Worldwide

In the 2021 Federal Budget, the Government of Canada committed to a National Quantum Strategy, including $360 million in investments over seven years.[3] The funding aims to support Canadian leadership in the Quantum field and will go towards quantum research and growth of quantum-ready technologies. The National Quantum Strategy specifically identified concerns over the IP protection of Quantum innovations in Canada as an issue to be addressed.

IP protection, and in particular patents, are powerful legal tools that innovative quantum researchers and companies can use to support further investment and commercialization efforts. Properly drafted patents can help ensure that companies involved in the development of new quantum technologies establish and maintain a position in this growing industry. Patents can help protect innovative technologies, by providing legal avenues to prevent other companies from using those technologies without authorization. More broadly, patents may help protect the significant government investments in research and development of quantum technologies and maintain Canada’s leading position in this field. However, as is too often the case, Canadian companies lag behind their counterparts in other countries when international patent filing trends are reviewed. 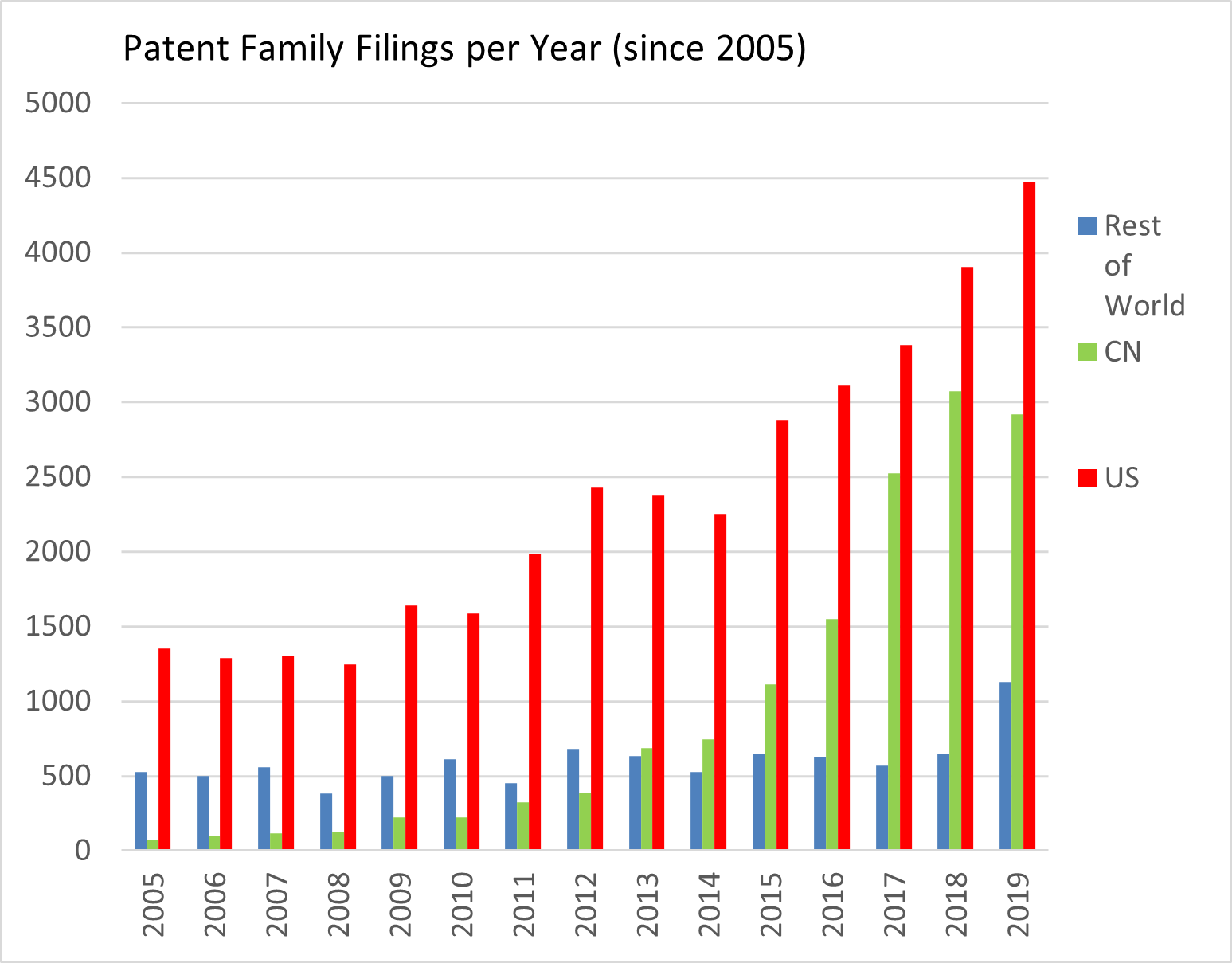 Given the size of the US and Chinese markets, it is no surprise that they are the leading markets for patent filings relating to quantum computing. The leading patent assignees (or patent owners) for inventions relating to quantum computing is also dominated by American and Chinese firms (along with Japanese and South Korean firms), with notable companies such as Microsoft, IBM, AT&T, Intel, Huawei, Apple, and Google leading the way. Canada is represented by only a few patent filers including companies such as D-Wave. Similar trends have been identified in patent filings relating to quantum technologies more generally[4].

With increasing investment into quantum technologies worldwide, the Canadian quantum industry faces a threat to its strong historical position. This threat is magnified by the lack of protection that is being sought by Canadian innovators over their developments in quantum technologies. Canada risks being left behind as the rest of the world develops quantum computing technologies and protects their developments with patent rights.

Currently, research and development in quantum computing are primarily funded through government grants or government projects (including the National Quantum Strategy). As the industry continues to grow and expand into the private sector, establishing a strong IP position including patents will help attract private opportunities and private investors and help Canadian researchers and companies maintain a competitive footing with other international players. Canadian governments and investors who fund the research and development of quantum technologies should consider pursuing a patent filing strategy in order to protect Canadian-developed quantum technology. For instance, budgeting for patent filings as part of funding the development of quantum technologies can encourage increased levels of patent filings.

The lack of IP activity by innovators is a broader theme in Canada—namely, the value of IP assets such as patents is underappreciated. The Federal Government, through the Canadian Intellectual Property Office (CIPO), has identified this IP knowledge gap and expanded IP education programs to increase awareness of IP in Canada. Given the funding opportunities and expected growth in this field, however, it behooves Canadian researchers and companies to include an IP strategy to solidify Canada’s position as a leader in quantum research and development, and to further promote investment in Canadian technologies.

It is important that Canadian quantum developers not be squeezed out by larger players in the US and China. Approaching the development of quantum computing technologies with an eye towards patent protection can help Canadian innovators maintain their position as leaders in quantum computing technologies. Working with advisors and IP counsel to help develop a thorough and thoughtful patent strategy can simplify this process for researchers and organizations who may not have the institutional knowledge to do so on their own.

For further information, or for help protecting your quantum computing developments, please get in touch with a member of Bereskin & Parr’s Quantum Technologies Group.